The theatrical proposal is inverted.

It is the text, the words that live within us and not us that « inhabit » the script.

Words are an amalgam of sounds and we, as humans, are subjective beings. The objective of this work is to discover all of the variations (Scenographic Shapes) that words suggest once they have found their path within the organism. It is work that requires us, through research, to know the different sensorial-organic routes, that actors and dancers use to transform the script into a scenographic creation. 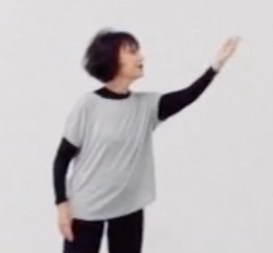 « The knowledge of sensorial-organic routes is fundamental in that it gives actors the staggering discovery of the infinite possibilities that we unknowingly possess, and which are so crucial when taking on a character. More than exercises I would say that this process is the result of a series of experiences. Following Berta Roth’s instructions, we live the experience in an almost scientific way, with great rigor, intensity and objectivity. I could describe the work as a spiral. There are sensations that emerge from the contact with the script and which produce thoughts. These thoughts become movements within the space, which then suggest new movements, during which the shapes that are created can have an impact on the script. I would also like to say that through her teaching and her interaction with the actors, Berta Roth works with what the actors suggest, thereby transforming these suggestions into directions that we must resolve. The goal is for a theatrical act to occur. There is no pre-established model, prior judgement or psychological interpretation of the character. Her work is a kind of fostering that teaches those she refers to as « people of the stage », to allow themselves to see their own creative process, to be seen, and to learn to read what we see on stage ».